What Can the Tortoise Clinic Do for You?

Today I’m super excited to bring you a look at a place my family and I have been visiting for years: the Tortoise Clinic. The acupuncture and herbal medicine they provide here are both absolutely amazing.

To help me explain what the clinic does, I spoke with medical director Drew Smith. Drew first got involved in acupuncture fairly early in life. In middle school, he developed an interest in martial arts and in Eastern culture in general.

It was specifically his junior year in high school when Drew says he first stumbled across the subject of Eastern medicine. He was browsing the shelves at a bookstore when he came across some material on the subject and was immediately fascinated.

After graduating, Drew went on to graduate school at Florida State University. There, he met his future wife. When she had to return home to Japan, he knew he had to do whatever it took to follow her there.

He received a scholarship from the Japanese government, allowing him to pick any university and course of study. On his second day of classes, he met a neighbor who happened to be a scholar of Chinese medicine The two began to practice tai chi together in the parks on campus.

Drew briefly returned to FSU, but then returned to Japan. He had sustained some injuries from judo, and found that Eastern medical treatments worked very well for them. From then on, he knew he wanted to study this kind of medicine. So, he found a school in Maryland and has been working in related fields since

“The possibilities for what Eastern medicine can achieve are as broad as the field itself.”

With all of that traveling, I wondered why Drew returned specifically to the Emerald Coast. He told me that since he grew up in Florida, he had always known and thought of our area as the state’s “sweet spot.” He didn’t originally have plans of returning to Florida, but ultimately wanted to fully pursue acupuncture and Eastern healing.

Having previously worked in a chiropractic clinic, he knew it was time to pursue his passion. It was actually when he saw an ad for an acupuncture business online that he decided to reply and see what would happen. That’s when he found the Tortoise Clinic. Next thing Drew knew, he and his wife moved to the area and have been here for nearly 10 years.

As far as the benefits of acupuncture and eastern medicine, Drew believes the possibilities are as broad as the field itself.  He says you could spend a lifetime studying the use of plants as medicine, and there would still be more to learn. In order to do this for a living, he believes you have to be able to help every pain there is.

Personally, he enjoys helping people boost their fertility. He also says that acupuncture can benefit people emotionally and digestively. Eastern medicine has been around for so long and is largely about your body healing itself through stimulation from acupuncture and herbal medicine.

If you’d like to learn more about the Tortoise Clinic, you can visit their website at www.TheTortoiseClinic.com. To drop by in person, simply go to 2441 US Highway 98 W Unit 111, Santa Rosa Beach. Their phone number is (850) 267-5611. I highly recommend checking them out.

This form needs Javascript to display, which your browser doesn't support. Sign up here instead 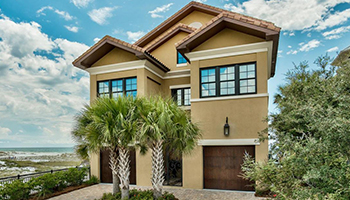 Looking to Sell a Home?

Abbott Realty Services, Inc is here to guide you and be your trusted real estate advisor. Abbott Realty Services launched one of the first real estate companies in Destin in the early 70’s and became the largest employer in Northwest Florida between the 80’s to the late 90’s. As natives to the Emerald Coast, Nathan, Erin, and Amanda Abbott carry on the Abbott Real Estate Tradition today as the third generation of Abbott Realtors.

Nathan and Erin started their real estate careers in 2002 as a husband and wife team. They started expanding their team in 2010 as the Nathan Abbott Team and opened Abbott Realty Services in 2020. Their team of local experts is your native source for real estate along Florida’s Emerald Coast. They continue to perform within the top 1% in real estate sales throughout Northwest Florida and take pride in Raising a Higher Standard of Expectation for the industry and their customers. Abbott Realty serves the Emerald Coast from Pensacola to Destin, Santa Rosa Beach and Panama City Beach. We are Native Experts Selling Paradise! Nathan further launched Abbott Builder Consultants with TJ Martin, providing a proven track record of success in new home and condo sales throughout the Florida Panhandle.